California lawmakers reject bill to extend last call to 4AM

Written by worlddancefm on 5th September 2017

Over the past few months, a bill had begun circulating and rising through the processes of approval that aimed to give local governments within the state of California the option to extend their county’s last call time for alcohol to 4 AM from the current limit of 2 AM.

The proposed bill had passed through Senate successfully and inspired the creation of a petition in support of the bill (which received over 1000 signatures), but unfortunately has now been denied in Assembly, which was the last step before it would’ve reached the governor’s desk for final approval.

Though it was ultimately rejected due to many opponents arguing that it would likely increase DUIs and other alcohol-related incidents and fatalities, lawmakers have decided to create a task force to study the concept proposed by the bill.

California Senator Scott Wiener, who first incepted the ‘Let Our Communities Adjust Late Night Act’ released a heated statement on Twitter in reaction to the rejection of the bill.

“There’s no need to study anything,” he began. “There’s nothing radical about letting local communities decide for themselves whether to let their bars and nightclubs go later. It’s embarrassing that California shuts down its nightlife so early. We’re not going to give up. Nightlife matters to our economy and culture, and California’s one-size-fits-all approach to closing time needs to be reformed.” 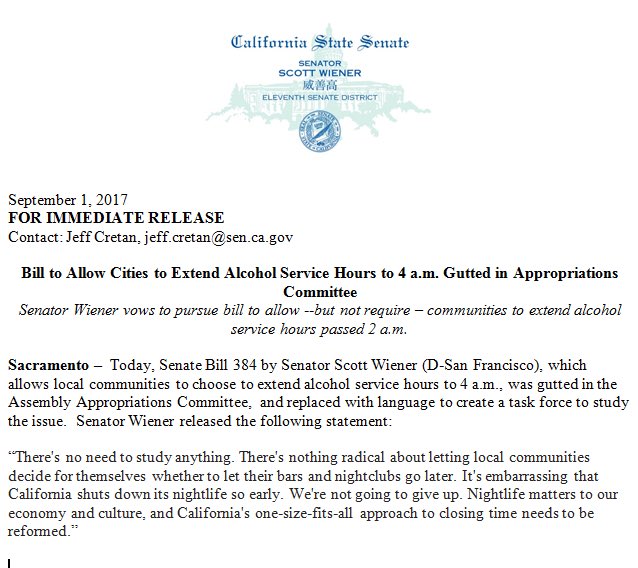 WARM is the music service democratising the music industry

Enzo Siragusa will play all night in London